Zooming in on the zine 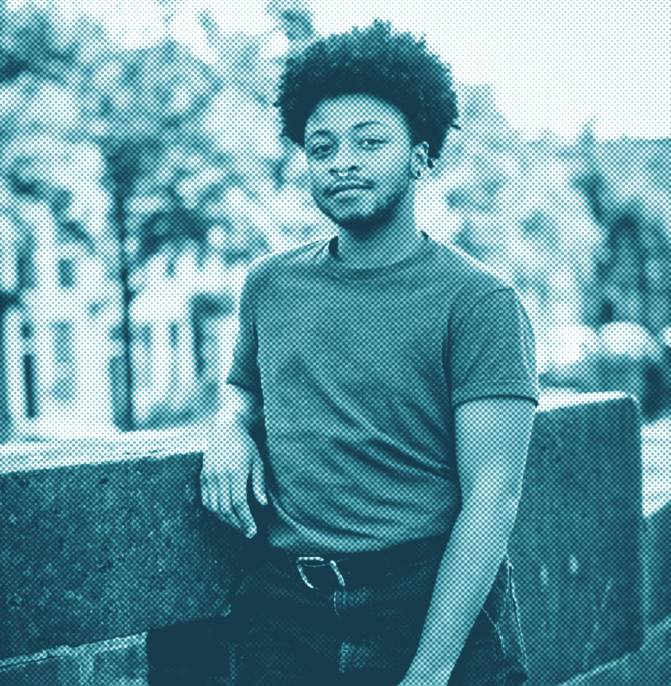 Zooming in on the zine

An interview with James Rae Parnell

Zines. Perhaps you have never heard of them, perhaps you are a fervent zinester (a person who creates zines) yourself. Perhaps you once held one in your hands, not knowing exactly what it was you were looking at. Because, what is a ‘zine’, exactly? Short for magazine, a zine (pronounced zeen) is a self-published and informally printed booklet. While there are not many rules when it comes to defining what constitutes as a zine, they are usually handmade, personal and printed in small numbers. They often have this imperfect messy quality, characterized by cut up photos and text mixed with drawings and handwritten passages. Zines tend to be popular in non-mainstream communities because they are easy to produce and distribute without spending a lot of money.

To learn more about what zines are exactly and what they can mean for people who identify as trans, I had a chat with seasoned zinester James Rae Parnell. Currently based in the Hague, James has created numerous zines on all different kinds of subjects ranging from Sorry Seems to Be the Hardest Word, a Zine about Apologies (January 2021), to Diverge Zine, How Do you Diverge? (July 2018). James is a facilitator of zine workshops and working at Rotterdam’s WORM as an event programmer. He is also active in the Dutch ballroom scene and working on initiatives such as the Black Trans Art & Joy Fund and the lecture/performance organization BARTALK located in the Hague.

What is a zine, according to you? How is it different from a magazine?

A zine is kind of an independently published magazine. Generally traditional magazines, to be frank, have a lot more money behind them. Magazines usually focus on making money with sales and advertisements and so on. They also cater to a larger market. Zines, on the other hand, come from this DIY (do it yourself) approach. There is an emphasis on imperfection; a zine doesn’t have to be perfect, it doesn’t have to be polished. They are cheap to produce and you usually sell them for cheap as well. You can slap something on paper, photocopy it and it’s a zine. Zine-making is a very accessible art production, anyone can make a zine.

Can you tell me a bit about the history of the zine?

I would say that historically, alternative communities and marginalized groups have been gravitating towards zines. So zines started with science fiction communities back in the 1930s with fanzines. At the time, science fiction was a genre that wasn’t taken very seriously by

publishers so fans would circulate their own short stories, articles about conventions and so forth. Then in the 70s and 80s you had the punk scene where people were not taken seriously and zines became an important part of punk subculture. Emerging from that in the 90s you have the riot grrrl movement and people of color talking about their experiences within punk in zines, such as Evolution of a Race Riot which came out in the late 90s.

What draws you to zine making?

The fact that you don’t have to cater to any particular audience. So if you’re queer for example, you don’t have to cater to a straight audience, right? If you’re black you don’t have to cater to any other audience than the audience that you want to. It provides a sense of freedom to people to talk very frankly and openly. And you know, with zines it’s like; take it or leave it. If you don’t like it, put it down. In that sense, you can create zines about whatever you want, even if the topic is really niche. Zines allow people to talk about their different experiences and share that information with others. So you see a lot of zines that are resource booklets and things like that. For example, I saw a really cool one recently that was about abolitionism within the context of disability justice. Zines can be a really good way of sharing information that might not be so available elsewhere.

Can you tell me a bit about your own zines?

So I started making zines around like 5 years ago. The first one I made was actually a research

project that I graduated with, like a thesis about non-normative sexualities. Most of my zines are research-based. When I identified as non-binary I did a lot of research around non-binary identity and made a zine about that. My zines often focus on my experiences in the queer community; so for example I made a zine about the Dutch ballroom scene and one that talked about queer and trans artists of color in the Netherlands. But my most recent zine is about apologies- I wanted to move away from exclusively “queer” topics- I do other stuff too. But that zine was also informed from my own experiences within the queer community. So I just try to make zines about things that I’m interested in, things that are important and that should be talked about.

How do you feel about the zine in the digital age?

So these days, a lot of people put their zines up online on websites such as Issue which, I think, is a good thing. Where I’m from in Alabama, I wasn’t exposed to zines, I didn’t know anything about zines. Even when I went back to visit I did not find any zines except for online. So in that sense, zines being spread online can reach a lot more people. Another change that has happened in the digital zine era is that zine culture has kind of shifted to be overtly polished, which I think is a pity because I miss this DIY energy that we talked about. The reason for this change, I think,

has to do with how everyone on the internet needs to be taken seriously more because they use the internet to sell their art for example.

Do you prefer physical zines over digital ones?

Yes definitely. To me, the physicality is what’s most important about zine making. It’s almost like you’re holding their heart if they’re writing about something that’s really vulnerable. With a physical zine you can almost trace back the gestures of the cutting and pasting. Or, when someone messes up a little bit, when they leave spelling mistakes and things like that you know it’s a part of that process. I always think it’s kinda nice when a zine is made on a photocopier from someone’s work because then it just feels much more urgent that they needed to share it.

What does community mean to you?

I think that the idea of queer community has become sort of a myth. We keep using the word community when we talk about the broader queer population but, to me, a community is people who you can trust. I think community is people you see regularly, people with whom you have shared values, people who support one another. I think ballroom really is a community because it’s something you are actively engaging in. You go to balls, you train, you walk, you’re invested in it. With the broader queer community, you cannot really be there for everyone in the physical sense. So in that sense, our usage of community has been kinda taken out of context. It is unfair to assume that people are part of a community because of a certain shared identity. Even though I do think we should all stick together.

You are also active in the ballroom scene right? Do you think there are any similarities between the ballroom and zine communities?

I think the zine and ballroom communities are so similar in the way that they are both so DIY. There are rules, but the rules are constantly changing and there’s this energy, it’s a very raw, vulnerable energy. If you look at the ballroom scene for example, there are people who experience racism, homophobia, transphobia everywhere, you know? So you need an outlet and ballroom is a space where people can let go. Everything that you have, you put it on the floor and you can really feel that in people’s performances; it’s so raw you know? I think zines also hold this same rawness, people are just pouring themselves onto the page.

Do you have any wishes for the trans community? (by lack of another word)

Well yeah, there’s so much infighting within the trans community and that makes me really sad. So I wish that everyone and I mean everyone, could really listen to what everyone else needs and to not take it personally. I wish that we would all listen to each other, what are our experiences and our needs and how can we find overlaps? I feel like sometimes there can be this dominant narrative on what it is like to be trans and people can feel very threatened by others who may not have a similar trans experience. And yeah, find unlikely allies. I’m all about unlikely allies. Find people who you may not have a lot in common with but something that you have a shared interest in and just work on that one project instead of you know, trying to make someone have the same beliefs that you do because well life is too short and the world is very big.

Do you have any tips for people making zines?

Read as many zines as you can. And, just make something! Start maybe with a mini zine, so a folded A4 piece of paper is a really nice way to start. Make whatever you want and be as honest and raw and as nerdy as possible. Find someone to share it with, check out a zine fest. Maybe reach out to distro’s (distributors ), that way you can reach more people, and hear how your work impacted them. That’s the most beautiful part of zine making; hearing how you sharing your truth has positively impacted someone else. Sounds corny but it’s very true. Just make stuff. Be honest, let people read it. There’s nowhere else you can be as honest as in a zine.

(he/him & they/them)
An is a filmmaker and photographer with a background in anthropology and media studies. He creates photos and videos and writes articles for Trans Magazine. In their free time, An likes to cook, make clothes and do karate.