Young dad Rowan looks back on his pregnancy 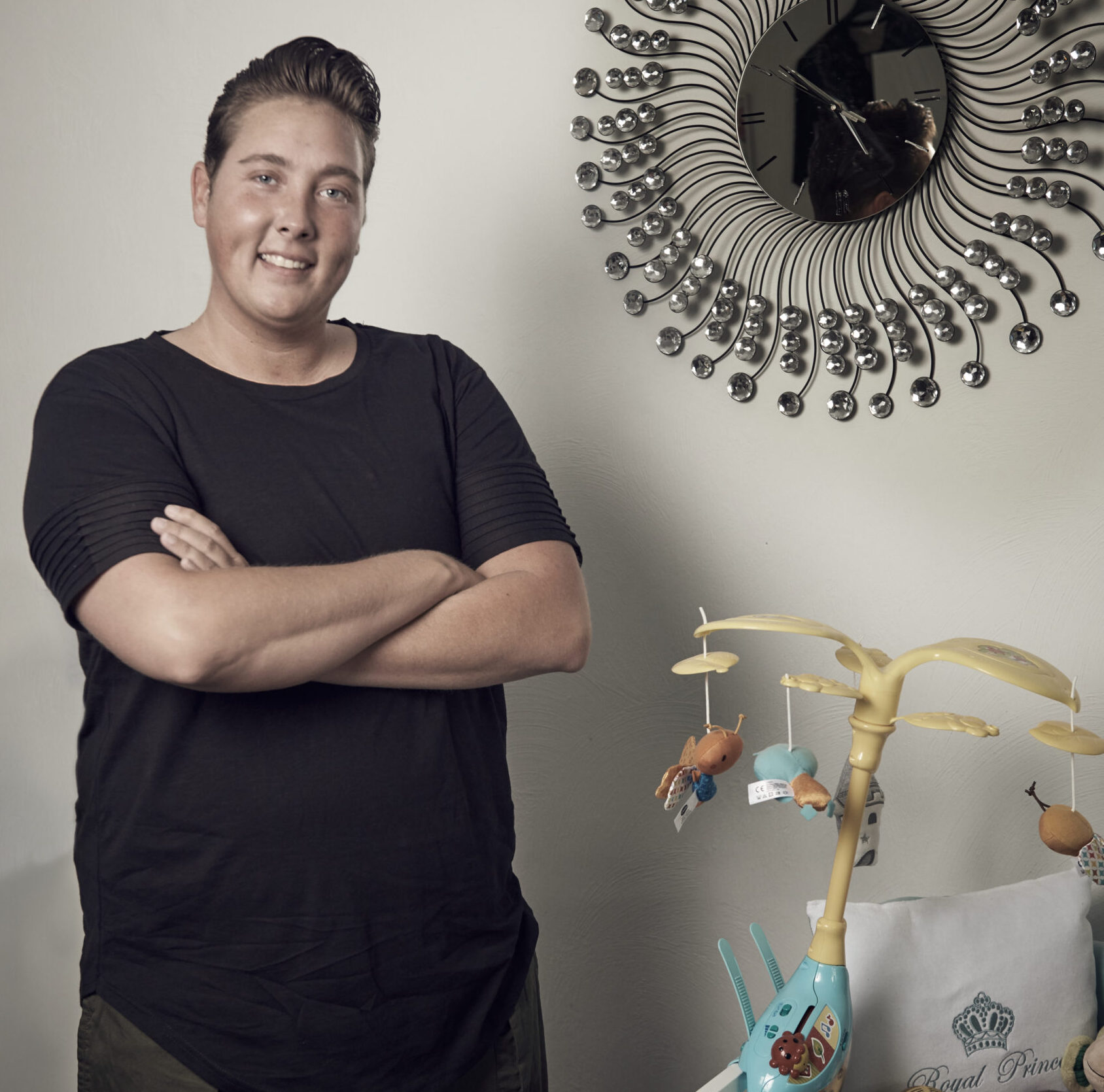 Young dad Rowan looks back on his pregnancy

Rowan, known from the TLC-series Onze transgender liefde (“Our transgender love”), has postponed his transition to be able to have a child with his (transgender) wife Louisa. In December 2017, he became the proud dad of Mikai and in April he finally started taking testosterone. I interviewed him two months later.

With his height of 1.85m he is tall for a trans man and the legs poking out of his shorts are quite hairy. What stands out most about him is his calm, open expression. During the interview it becomes clear that is his outlook in general: calm and open. He receives every question quietly, before giving an extensive and personal answer. A sensible man who has made it his life mission introduce others to being trans.

“Back in the day, I didn’t know the word ‘transgender’. I always said I was a lesbian, because it seemed closest to what I felt, as I’m attracted to women. I long denied being transgender. I always said that I wanted a child, but that I wasn’t going to carry it. I expected to be in a relationship with a woman and thought that she’d become pregnant. You don’t usually imagine coming home with a trans woman. Louisa and I both really wanted children and have thought long about being able to fulfil this wish. We were lucky that I was still able to be pregnant. So when we decided to have a child, I was going to be the one to carry it.

I postponed my transition to be able to get pregnant.. That was a conscious choice, because I knew that once I started hormones, I would no longer want to stop. It took me a year to get pregnant and postponing my transition was very frustrating.. During the last IUI-attempt (the injection of sperm) I was convinced it wouldn’t take, so I drank and smoked quite heavily. When my menstruation didn’t arrive on time, I took a pregnancy test and it turned out to be positive. I immediately started living very healthily: no alcohol, no smoking. I drank a lot of water, ate fruit and vegetables. I proceeded to push my gender dysphoria down deep. I knew my transition would start just a few months after childbirth, so that helped me a lot.

I experienced some blood loss early on and was scared things would go wrong. I had to go into the midwife’s practice more often and undress myself every time. This is an unusual practice and it bothered me. I was lucky that the owner of the practice knew me and my situation. I only had two different midwives.. When they had to do anything ‘down under’, they would explain exactly what they were about to do and warned me before touching me ‘there’. The pregnancy itself was very stressful. I suffered from pelvic instability, sciatica, and cholestasis of pregnancy (a narrowing of the bile ducts that prevents the bile from passing from the gallbladder to the intestines). Cholestatis is itchy and carries risks for the child: premature birth or miscarriage.

I wore binders during my pregnancy. My breasts did become bigger, but I think the binders limited this. I gained a lot of weight, because I could barely move – due to the pelvic instability and sciatica. We live in an apartment and I’d plan my day so that I only had to go downstairs once. At the end, I weighed 141kg and would drag myself up the stairs crying. I didn’t want painkillers, because they could’ve reached the little one. I felt masculine during the entire pregnancy, up until a few weeks prior to the delivery. I wasn’t sure of my gender identity at that point. It shocked me: I felt neither man nor woman. This was probably because of female hormones. I feel like myself again. Thank goodness.

A child is born without prejudice

I hide myself a little bit during my pregnancy. I was in a lot of pain, I couldn’t really go outside. We are well-known, we got a lot of positive, but also negative response on the internet. ‘This isn’t normal’, ‘you don’t deserve a child’, stuff like that. The people around us would often ask: ‘Have you guys considered that the child will be picked on?’. I would say: ‘A child isn’t born with prejudice. If your child teases my child because their parents are transgender, it’s because of what you told them.’

We both have been bullied in the past. You usually build a shield around you before you come out as transgender, but people keeping asking what’s what. There’s two things you can do: say nothing and keep getting questions, or open up. Thanks to TLC we have had the chance to open up and explain transsexuality properly.

After 38 weeks, labour was induced, because of the cholestasis. I wanted to have a natural delivery; I wanted to give birth the way I felt it should be. I’d said I didn’t want anyone present at the delivery in advance, but when the time came, I no longer cared. I lay there with my legs in the styrrups and everyone paced around me: my mom, my wife, the camera crew.

I didn’t care, I focused on my breathing and getting the child out. It took twenty-two hours; fourteen of which I had full-on contractions. Still I couldn’t pass the 5 cm dilation.

The worst part was having a balloon catheter inserted. It hurt! I don’t know what this is like for others, but I can’t have things put inside me.

I was very calm during the delivery, didn’t scream, didn’t curse. Although I was in a lot of pain, I didn’t want painkillers. In the end it was necessary after all because I was too exhausted. I was pushing for an hour and fifty minutes. That was far too long. They wanted to take me away for a C-section, but I said: ‘I don’t want that, I will push it out myself.’ It was so difficult that I ended up passing out after the child was born.

We both raise our son, but Louisa does more than me. I love him very much, but truth be told find babies a little dull. When he’s bigger I’ll go play football with him; I’ll enjoy it more. I give him the bottle, change his diapers and rock him to sleep. But if he’s pooped, I let my wife take care of that. Haha, we are well adapted to each other. Friends say we are good parents. For us it wasn’t a given that we’d have children, we thought about it a lot and it was a very deliberate choice. For ‘normal’ hetero couples it’s much easier.

Our son will be baptised on the 30th of June. It’s special that we can. We wanted to get married in a church, but because we both had an ‘F’ in our passport, it wasn’t allowed. I still have that ‘F’, but after the birth of our son the parish gifted me a Maria-charm and a letter with best wishes for us and our son. The letter said that if we wanted to get him baptised, we could get in touch. They watched our series and came round, apparently.

I’m still a female by law, so I’m registered as being the mother of my son. I don’t mind. If there is a medical emergency, I’ll have to mention that I birthed him and not Louisa, because he has my genes. We’ll tell Mikai as late as possible. I’m not sure how we will go about it yet. We’re famous in the Netherlands, so I’m sure he’ll hear something at school some point. We don’t want to try to get ahead of that, but we’ll tell him when we need to.. We don’t want to make things more difficult than they are. Maybe it is a little selfish that we wanted a child, knowing that he could get bullied. Oh well…

Regret is worse than embarrassment

To trans people who’re not sure if they want to keep the option open to have their own child, I’d say: ‘when in doubt, do it!’. Otherwise you might regret it later, like Louisa. For trans women it might be slightly embarrassing to have to fill a jar of sperm, but regret is worse. And trans men: dreading pregnancy is the worst, but once I was pregnant it wasn’t so bad after all. It was all worth it. If I’d never had a child, I would’ve become depressed. We both wanted this and what are nine months compared to an entire lifetime? I watched Netflix for nine months and had myself cared for and pampered by my wife. I was very matter of fact about it. I saw it as a phase, it would pass. I truly enjoyed feeling the baby move in my belly. Very consciously because I knew I would only be pregnant once. No, I don’t want to get pregnant again. Now it’s time for me: the little one arrived, my wife is ready, it’s my turn. Finally, I can go on with my life, after it stood still for years. But the waiting, the pregnancy, childbirth, it was all worth it, because I have something wonderful now. Beforehand I’d planned to start hormones in April, and so it happened. My goal is to be able to go swimming with my son at the end of this year. The breast operation is allowed half a year after starting hormones. If it’s not possible before the end of the year at the Amsterdam UMC, I will go to a private clinic. I’ve been walking around for thirty-three years with these things, that’s more than enough.

I’ve never said this before, but I am proud of myself for doing this.

At the moment I am very happy, my wife is happy and the little on is happy. That’s what matters.”

I am curious to know how similar or different the experiences for other trans women reading this have been. What have been the ups and downs of dating as trans women? Are you on this site? If yes, what has been your experience so far? Do you think these kinds of sites are helpful for trans persons? What about those who are more open to or have experiences outside the binaries? I am curious to read your stories. Please leave a comment below or contact us via info@transmagazine.nl.