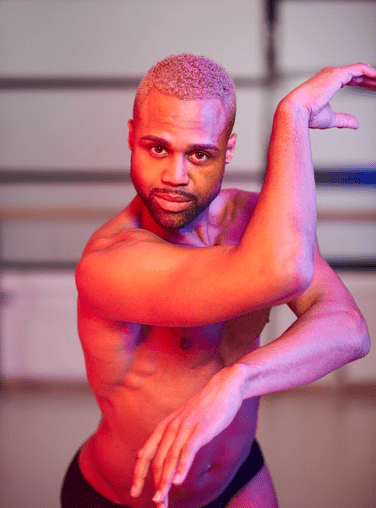 Dancer Louis Alves got the “go ahead” to start taking feminising hormones at age eighteen. Soon after that, he received a scholarship for two prestigious study programs in the United States. He left for New York. When he returned to the Netherlands with two coveted diplomas, Louis decided not to transition. Louis, an established dancer and teacher, reflects on the process and the influence his environment has had on his search for himself.

not transitioning — Since the age of three or four, I became interested in girly things. I never noticed this as a child, but only when I became I older, I noticed other people correcting my behaviour. That did not change my identity. I didn’t hold back when I was a child. I didn’t identify with the male gender. I was busy being a girl.

It hurt me whenever someone called me a boy. I thought it was wonderful when someone said to my parents: “I didn’t know you had a daughter.” It made my eyes sparkle. It became quite awkward when my mother would say: “No, no, that’s my son”.

I was eight or nine years old when I started dancing. I started heading toward the pro scene right away. It was an outlet in many ways: it allowed me to vent my frustration. Dancing was everything to me. A Cape Verdean family is not exactly excited to have a kid who’s different. I got corrected all the time and I always got to hear: “Why do you behave like that? You’re not a girl, you’re a boy. Boys don’t behave like that. Look at your brothers.” They were real manly boys.

When I was eighteen, I saw Kelley van der Veer on TV in the Travestieshow. She told that she felt she was a woman and was going to transition. I thought: “Oh, so it’s possible, you really can make a choice and decide to be a woman.” At that moment I felt it with every fiber of my being: I am a woman.

I then wrote a letter to my family to tell them I was a woman and I wanted to become one. I let them know I was visiting the gender clinic at the VU hospital in Amsterdam. I got very different reactions. Some relatives were like: “I always knew you were different, but I thought you were ‘just’ gay.” Others had already seen that I was very feminine and were not surprised. They thought I was brave for sharing and making the decision. My brothers never reacted.

I didn’t know whether I could continue dancing as a woman, would I be able to pass?

I was excited to go to the VU. I thought: “I’m doing something for real.” But it was scary too. It meant that I was taking serious steps. At that moment I knew I was a woman, felt like a woman and wanted to be a woman. But I didn’t know whether I could continue dancing as a woman, would I be able to pass? That was a major concern of mine when I was younger.

I wanted to fit in with my friends. Go and meet boys. That was really important to me.

I also feared that I’d lose physical strength if I’d use feminising hormones. Your body changes, but you never really know how. No one can predict that. I was always asking: “How will my transition affect my dancing?”

After I got the “go ahead” for the transition process, I went to New York and Los Angeles on a scholarship. I noticed in America that people were more open. I experienced something that I hadn’t in the Netherlands, not even in the dance scene: they were not weird about it. I felt more accepted, at least in the big cities. In the Netherlands I went around in the hip hop scene where the culture was very macho: “Boys are like this, and girls are like that.” That was tough for me. I never had the feeling I belonged in the Netherlands.

But in America I wore my baggy pants and tights, I grew my nails out, I braided my hair. Being a woman doesn’t stop me from badass dancing. So dance made me feel comfortable with showing that side of me. Outside of the dance world, I was an introvert. So I never showed that part of me on a daily basis.

I used to hate Black culture in the Netherlands. That’s why I mostly hung out with white people. I always got negative reactions on who I was from Black culture, people always had their remarks ready. They often thought the same way my parents did. In America I saw a different side to life. There, the tough boys were like, “Hey, how are you doing,” and didn’t mind hugging each other. It was so weird for me to see a Black person be so open and relaxed. They didn’t look at what I was wearing, but saw me as a person. That was when I started to accept myself. I realised that I didn’t necessarily have to choose a gender. I could be as feminine as I wanted. That feeling was encouraged more in America. That was one of the reasons transition didn’t feel necessary anymore.

When I was twenty-eight, I wanted to do more paid work. The world of professional dance has very strong cis man and cis woman vibes; that’s a reflection of our society. I wanted more bookings, so I presented myself as a man. I grew more comfortable in that role. I started training more. I participated in So You Think You Can Dance, where I had to grow a beard. If you’d have told me ten years before that that I’d ever have a beard, or even chest hair, there’s no way I’d have believed you. I was seriously planning to have everything lasered.

So yeah, how would I describe my identity now? I’m above all just myself. I grew more harmonic with my masculine side around the time I was twenty-nine. I felt more and more comfortable with that part of man in me. I do notice that I would aesthetically like to have a more feminine shape; but not necessarily the shape I wanted ten years ago. Back then I really wanted to be a woman, but I didn’t know how. I haven’t had that feeling for quite some time. So if you ask me if I’d want to transition, I’d say no. I think it’s beautiful when a man has something feminine, or when a woman has something masculine.

My grandmother was a wise woman, very spiritual. She always said: “You’re in this life to learn certain lessons, and you’re right just the way you are. You can be a man and a woman. When we depart from this life, we are souls. Souls are genderless; you’re in that process already. You don’t have to choose.”

My gender is not relevant. I’m simply Louis.

Femininity has become part of me. If I’d deny that, I’d be denying myself. So that wouldn’t make sense and especially not with dancing. The way to have a real presence is to put yourself out there, to be your true self. Otherwise it’s fake. So I don’t hide away my femininity and I don’t make it a secret. It’s part of me and part of my journey

I don’t label myself anymore. My gender is not relevant. I’m simply Louis, just see me as a human being.

In addition, read the interview with dancer and television presenter Jan Kooijman: More diversion in TV-series Hij is een Zij.