My gender identity: outside the binary boxes 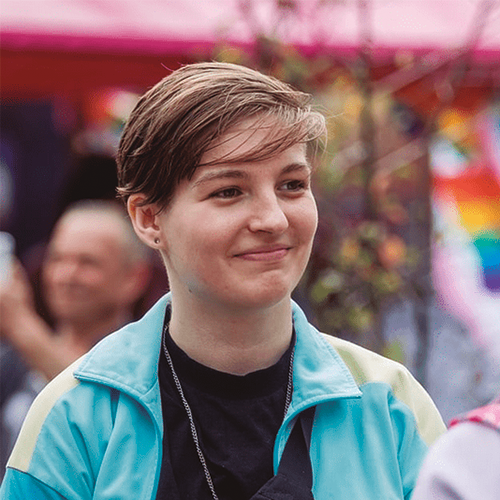 My gender identity: outside the binary boxes

Non-binary: not identifying with the man/woman dichotomy. That’s the best way for me to define my gender experience. In a society that’s structured in a binary way, it’s a considerable journey for people like me to find your place. How do you find acknowledgement and recognitions within and outside of the transgender community?

Documentaries like Genderbende, Beste Reizigers en Marvel Harris: Alles Is Nu were of great significance to me. These movies made the topic of my gender identity more approachable to my family and easier to discuss. It’s essential to see yourself be represented. Recognition gives you strength. When I can recognise myself in the story of another, I feel less lonely. Besides that my future perspective becomes more positive when I see other people like me, who are happy and successful. It gives me hope and I think that it gives other non-binary people hope as well. By sharing my personal story, I want to offer recognition and acknowledgement and contribute to a positive imaging.

I can remember well how I used to get questions in primary school about my hair whenever it was short, and about my clothes if they were ‘boy-ish’. My parents told me that it doesn’t matter what I look like, but who I am inside. They gave me the space to wear whatever I wanted to school. To family parties, though, I usually wore a decent dress or skirt. I noticed that I was awarded with compliments whenever I looked like a ‘decent girl’. On the one hand this made me feel good because I liked the compliments, but on the other hand it felt uncomfortable: as if I was dressing up instead of just dressing myself.

My clothes were often bought at second-hand stores and I also often got clothes that used to belong to my cousin. My parents didn’t care whether it was boys or girls clothing. From the age of about 9 I sometimes went to the city with my mum and then we’d buy shoes or trousers together. It was around the same time I told my parents I didn’t want to wear boots or skirts anymore. I saw a story with grey-and-white sneakers from the boys department. I really wanted to get them but I was also scared. Because they were ‘boy’s shoes’, I was afraid of the negative reactions I might get at school. My mum immediately bought two pairs to show me she supported me. I wore them constantly.

Sometimes people would yell ‘boy’ at me. Although I never felt insulted when someone would call me a boy I know that it was meant in a hurtful way and that I was being excluded. I noticed that girls my age got mad whenever someone would yell that at them, but I didn’t really feel like a girl and that’s why I wasn’t insulted when people would say that to me. I didn’t care much whether people didn’t see me as a girl.

In my class there was a clear divide between the boys and the girls. Girls barely hung out with boys nor vice versa. I saw how another girl from my class was being bullied for her clothes and behaviour because my classmates thought that those didn’t fit girls. She never wore dresses or skirts but always trousers and snapbacks, she played soccer and liked to play with lego. I hung out a lot with her. I recognised myself in her and found it cool that she stayed herself despite all the criticism.

My self imagine during puberty

When I started puberty, my self image and the relationship I had with my body got worse. I wasn’t consciously thinking about what happened with my body because I didn’t want to think about the changes. I avoided the mirror as much as possible and whenever I did happen to look in the mirror I wasn’t happy. I started eating less, to prevent the feminising of my body and started self harming.

I hurt myself because of a low self-esteem and stress: stress about my body and the lack of self-esteem. I also experienced stress whenever I thought about the opinions of others. By harming my body by eating less of hurting it the stress momentarily became less and the pain I had mentally, physical pain. This led to a brief release of tension. Gradually this became an addiction. I had to feel pain more often and intensely to experience a moment of happiness. This was an unhealthy coping mechanism. My little sister was my biggest motivation to start working on my problems: I wanted to make her laugh instead of worried. Later I wanted this for myself as well. The past 9 years I’ve been to several psychologists. By now I have been with the same one for 2 years now. And I’m doing really well.

In the first three years of secondary school a rumor went around that I was a lesbian. This was, especially in a class filled almost completely with girls, a big deal. Girls from my class didn’t want to undress for P.E. because they were scared that I would look at them. Meanwhile, I would only look at the floor of the dressing room to make them feel more comfortable, precisely because I was so aware of their fear. To clarify, I did at one point tell people that I am in fact attracted to girls. That was a big relief and I felt more freedom to express myself, although I still had doubts about the label ‘lesbian’. I took more freedom when it came to experimenting with clothes. I mostly started wearing layers and bought shirts and sweaters from the ‘men’s’ department. This made me a lot more confident.

In the last three years of secondary school more people came out and I got to know people with whom I could openly talk about my sexuality. I was very passionate about improving the situation for lgbti+ students and I helped organise Purple Friday. These last few years I wasn’t teased or bullied. People barely commented when I was the only ‘girl’ who wore trousers and a dress shirt to the christmas ball.

Studying and looking for the lgbti+ community

When I started my studies after secondary school, I ended up in a more difficult period again. During my study period the question of to what extend the labels ‘woman’ and ‘lesbian’ were applicable to me started to grow. At first I thought it had to do with my sexuality that I didn’t really feel like a woman. Until I learned about gender dysphoria at my Applied Psychology studies and saw the documentary Genderbende. It touched me deeply to see people talk openly about their nonbinary experience of gender. It was the first time that I experienced a feeling of recognition. This led to things slowly falling into place. I started asking myself more and more questions about what I felt whenever I looked in the mirror and what I felt whenever people would point out my womanness. I asked myself questions like: when do I look at myself in the mirror with a smile and when don’t I? What influences that? How do I feel when people call me ‘ma’am’ and why do I feel like that? How would I present myself when I go outside or visit family if I wouldn’t get comments about my gender expression?

I decided to cut my hair shorter and bought a ‘man’s’ suit for my 18th birthday. I stopped my Psychology study and joined the student association A.S.V. Gay. I looked up the lgbti+ community and met people who were diverse in their gender identity and expression. Through Faith, one of my friends, I got to know a lot of people from the nightlife. We went to the MilkShake Festival and Pride together. Those were big steps for me. Faith really inspired me by how she expressed and dressed herself. She (un)consciously helped me a lot with my gender quest.

That year I started a new study, Cultural Social Education, where people didn’t look weird at me for what I would wear. I dedicated myself within my study to the transference of knowledge about the lgbti+ community. I’ve always felt safe there.

In the summer of 2019 I went to Pride East with Faith, where a trans walk was organised. The photo next to this was taken there. We wanted to show our support. I did already identify as nonbinary, but I barely spoke about my gender identity and experiences.

In January 2020 I shared a message for the first time in which I told about the fact that I identify as nonbinary. Since that time I’ve talked openly about this.

Now that I have a better understanding of gender and gender dysphoria, I finally get where my low self-esteem and disconnect with my body came from. I have physical gender dysphoria. I find it hard to look at myself in the mirror when I’m not wearing a binder. Seeing a flat chest makes me incredibly happy. I would really love to get a mastectomy and I’m already looking forward to the moment that I can go swimming after that procedure, shirtless.

I’ve asked myself whether I’m not a man, but I’ve never felt like the words ‘boy’ or ‘man’ adequately describe my feelings and experience of gender. I can’t imagine fitting in the box man. Whenever people call me ‘sir’ it makes me happy because this means they don’t see a ma’am, but it doesn’t make me happy because they see a man. That is the biggest difference I think. It makes me the happiest whenever people address me neutrally. In those moments I feel like I’m seen for who I am.

Looking toward the future

Throughout the years I’ve noticed that the more difficult it becomes for people to put me in either the box man or woman, the more negative reactions I get. When I was still in primary school, I ran into boys from my neighbourhood on the way to school who would yell things at me, usually about my clothes. At secondary school people would make comments about this as well. I still get reactions when I use public transport or walk through the city. Sometimes people come up to me and ask me: ‘Are you a man or a woman?’.

It can feel painful for someone like me when someone immediately assumes I’m a woman, for example because of my voice, and address me with she/her/ma’am. Fear for reactions from the outside world sometimes leads to me preferring to stay inside. In therapy however I’ve learned to avoid situations as little as possible. If my fear bothers me a lot I ask my psychologist, friends of family for help and try to talk about it or write down my feelings.

I’ve repeatedly asked myself whether I didn’t make things too difficult for myself by coming out as nonbinary. But by now I’ve accepted that –despite the fact that it’s difficult to find my place in society– I and my gender identity are allowed to exist. It’s important to me to listen to my feelings and experiences and be heard in this. And I learned that I can ask for respect and attention for my feelings. I also took steps in how I look at myself. I learned to recognise beauty and found it in myself and my body. I can also finally enjoy the freedom my gender identity gives me. And I am incredibly happy with the steps I took and the growth I’m going through. Because of my internship with Transgender Network Nederland I realised that I want to keep dedicating myself every day for the acceptance of lgbti+ people, especially nonbinary people. 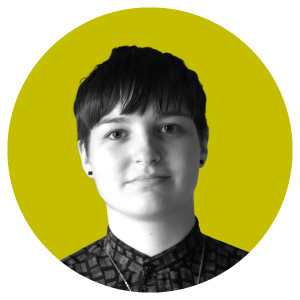