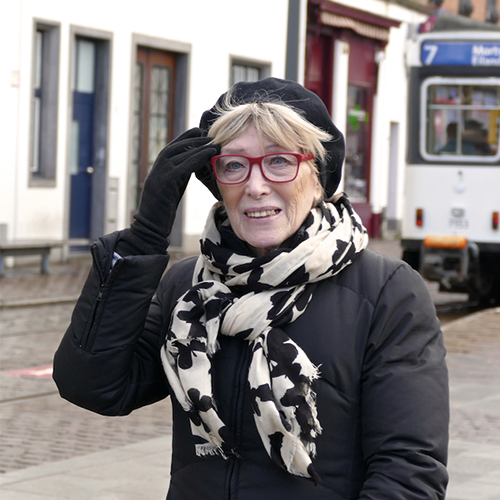 A conversation with Eveline van de Putte, author of the book Nieuwe Namen

My book “Stormachtig Stil” contains life stories of ‘pink elderly’. As a result of that work, I spent the past four years traveling throughout the Netherlands and Flanders to talk about the experiences of this group of elderly people: the Tour d’Amour. I have visited nursing homes, colleges, and other organizations where elderly people come or work with older people. I wanted to discuss the subject of ‘sexual diversity’ and also ‘gender identity’ in order to create more awareness about this. Specifically, with my book and the Tour, I wanted to contribute to a safer living environment for pink and transgender older people. Tailor-made care and “care without judgement”. At the end that’s what it’s all about.

During those meetings and gatherings I noticed that people had some idea of what the letters ‘LGB’ mean, but when I asked about the ‘t’ it turned out that there was still a lot of unfamiliarity regarding it. Especially the combination of ‘transgender’ and ‘elderly’. What I heard a lot was: ‘We don’t know any transgender elderly. Do they exist? I have never seen them!’. If anyone knew anything about transgender people, it was young adults or children.

That brought me to the idea to make a new book about transgender older people. I wanted to portray this hidden group and give them a voice. If these older people are not seen or heard, people will automatically think that they don’t exist at all. But of course they exist. This older generation grew up at a time when little or nothing was known about the subject of ‘being transgender’, so you couldn’t talk about it. Many of them thought they were crazy at the time, or they were the only person in the world who had such feelings about their identity.

In my book, I had interviewed two older transgender women and came across the Association for Gender Diversity, which has many older members. I also got in touch with Transgender Netwerk Nederland and TransAmsterdam, and a number of other transgender organizations. Because of those associations and clubs, my network grew. It became known that for my project I was looking for transgender older people – preferably as old as possible. In the end, I ended up with eighteen people who voiced in my book. More people had signed up by word of mouth, and it showed that there was a huge need to tell their stories. However, I had to limit myself to a certain number of pages.

One of the things that struck me during my research is that there is a lot more social resistance against the group of transgender older people than there is against the group of pink older people. I noticed this, for example, through reactions to the story of someone aged seventy who had just undergone gender affirming operation. Comments like: ‘Was that really necessary at your age?’ and ‘Couldn’t she have just let it go for those few years?’ Such reactions not only testify ignorance and incomprehension, but also seem disrespectful to me. At times like that, I tried to explain that a transition is not something you do ‘for a while’, and that for some people it can take years before they are ready to take that step. It often takes years and years of uncertainty, fear, and deep unhappiness. When one finally has the space to take this step, it shows great courage. With usually a very happy person as a result: ‘I never dared to hope that I would succeed: finally become happy, finally myself!

I’ve also heard stories that surgery was not possible because of medical problems. After all, every operation contains a risk. The fact that such a long and fervently desired operation ultimately cannot be performed is a serious disappointment to process.

Just as with young people, the older generation has a group of people who don’t want to transition, but they don’t feel like a traditional man or woman either.

To the rest of the world this seems even more complicated: What are they, a man or a woman? Apparently, we are so conditioned that we need boxes to understand what we see. We have to learn that these boxes are outdated, that there is much more diversity, thank God. I believe that diversity makes society only more beautiful.

With my stories, I try to indicate that it’s not always important whether you understand someone completely or not, but that it’s about respecting someone for who they are. It’s about someone’s well-being, about his or her happiness!

What returns in almost everyone’s story is the feeling of being the only one walking around with transgender feelings. This has been mainly because of the spirit of the times. For example, it used to be punishable for a man to walk around in women’s clothes. You couldn’t share your feelings with anyone. There weren’t any magazines or television programmes about the subject, and the internet didn’t exist yet, so you could hardly get any information.

In the eighties, the occasional article appeared, usually with a sensational undertone. People recognized their feelings in such stories for the first time. One of the interviewees told me that under her mattress she had hidden the Panorama with an article about a trans woman, afraid that someone would find it. Another had cut out that same article and carried it with her for years.

Many of the transgender elderly have had to contend with enormous loneliness. Recognition is very important, and I have heard many responses to the book New Names: ‘If I’d had a book like this when I was younger, I wouldn’t have stayed locked up in my men’s suit for so long’. Almost all stories end with victory: finally being yourself.

For this book, I consciously focused on both the diversity within gender identity and cultural identity. Unfortunately, it turned out to be very difficult to find bicultural transgender people over the age of fifty.

I also wrote down the story of the partner of a transgender woman. They had been married for forty-five years when her ‘husband’ came out as a woman. She stayed with her until the death of her partner. I would have also liked to interview a father, mother, or child of an older transgender person, but unfortunately, I had to limit this as otherwise, the book would become too bulky.

At the end of my book, you will find a thorough epilogue by doctor Paula Vennix, psychologist, social-sexological researcher, transgender. Among other things, she discusses the differences between transgender older and younger people. There is also a glossary in the book, making the reading material more widely accessible. In this way, the book becomes more than just a collection of short stories and can be used, for example, as teaching material in education and courses.