Ryan (non binary trans) and David (cis) are a queer couple with a desire to have children. What do they encounter during their beautiful but sometimes complicated journey to a child of their own? In an intimate correspondence they share their thoughts and feelings with each other, and with us. They take it in turns to tackle a specific topic.

The appointment had already been made: in a month I would have an appointment at the fertility doctor to see how my oviducts were functioning. So far they didn’t seem to be doing anything and I wasn’t pregnant yet. I was supposed to go through one more cycle with medication and then I would have my appointment. But I wasn’t looking forward to it, we didn’t really believe in it anymore. It was probably going to be even more complicated than what we had hoped for.

Suddenly there was a turn of events. I was woken up at six o’ clock by my usual morning alarm and I took my temperature. There was a ‘dip’, my temperature was much lower than usual. Was this then that long-awaited incubation dip? That would mean that the fertilized egg had made its way into the uterus and was starting to incubate in order to grow big and strong. I told you the news but you weren’t convinced: ‘Did you maybe leave the window open or did you forget to put on your socks, so you got cold?’ Each of those possible causes for a low temperature. I’ve had a low or high temperature before that I couldn’t explain. But this time it felt different.

Two days after that temperature dip I wanted to put my suspicions to the test and I woke up early to take a pregnancy test. It was actually two days too early because I wasn’t going to get my period yet but I couldn’t wait any longer. Just like all the other times that I did a test, I couldn’t wait for the result. Over and over again I would look at the spot where the line should appear, but it never did. This time everything was different. A very thin light-pink line appeared in the right place. Was this real? You looked at it and couldn’t believe it. Was this really a positive test? Surely it couldn’t be! But slowly, during the day and after asking me again and again if I really thought I was pregnant, you too started to believe in the positive test.

To be absolutely sure we took another test two days after, on the day I should have gotten my period. This time not with one of the cheap ones that cost a few euros, but with a fancy expensive one that I had been saving for the past year for this special moment. We barely had to wait a second as already a thick line filled the white background of the test. Magical! It was really true. In my belly a tiny miracle had started to grow. First we became very quiet but after we felt like we could shout it from the rooftops.

How did you experience this roller coaster?

It was absolutely a roller coaster, not just the test week but also the weeks before the test were quite intense. Days before that test, a friend came to visit us and asked us about our journey. We had actually both given up the hope to get pregnant. We hadn’t said this out loud to each other yet. So it became an intimate conversation between us and this friend. We explained to him how you had been measuring and testing everything for one-and-a-half years and that we would be disappointed every time when it didn’t work. It cost us and especially you a lot of energy to hope for a pregnancy every time. Thanks to this conversation in which we both openly talked about the effect this process has had on us, we realised that we had been trying for one-and-a-half years, that your hormones had been going up and down and how we fell from hope into disappointment. By talking about this openly with a third person it became clear we were ready for new medical steps. Everything we had tried so far didn’t lead to a pregnancy. I was starting to worry and wonder if it would ever work for us.

We decided during that conversation to discuss everything with our gynaecologist during our next appointment. We would tell her that we had lost hope in this process and that we hoped to try new and different options to get you pregnant. This appointment was planned to take place fourteen days after our conversation.

A week later you told me you measured a temperature dip that fits with incubation. I didn’t believe you. I had already set my mind on this appointment with the doctor. I thought about all the disappointments we had already had and couldn’t imagine it had worked this time. I think I wanted to protect myself from another disappointment. Then you took an early pregnancy test and again you said, ‘I think it worked’. And indeed: there was a thin line. But again I couldn’t really believe it. You insisted however that it really was true this time. Slowly but surely that little flame of luck also started to burn inside of me and I dared to hope and wish that it had finally worked.

A few days later we did the final check. Full of excitement we watched the pregnancy stick at six in the morning. You warned me that it could take a few minutes before we would see anything. But within a few seconds a thick line showed. It was really true: it had worked. I fell silent. We looked at each other and fell into each other’s arms. It felt like an eternity. This was the biggest thing that would ever happen to us. We’re going to be parents!

After a silence filled with happiness we wanted to shout it from the rooftops. Beautiful Ryan, inside of you grows our little one, unbelievable right?! It fills me with pride, I’m proud of you, that all these pills and measurements and tests have led to something so beautiful. Now it truly begins! 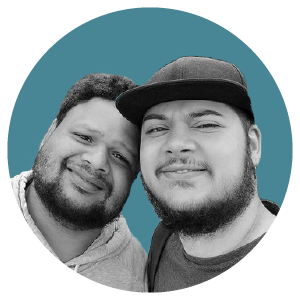