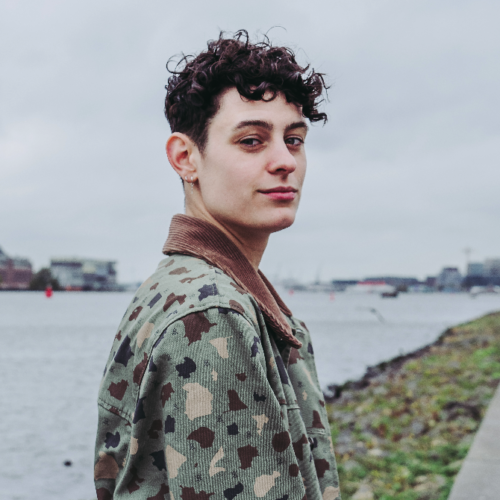 My fingers hold the hot tea cup very tight. Photographer An and I met too early in the café of the film museum Eye, under the guise of ‘preparation’. We chose a place to sit in the fashionable establishment. We take turns spouting empty sentences, they just won’t turn into a conversation. In a few minutes we are going to meet a phenomenon. When the hands of the clock finally close their circle, we look at each other hesitantly. ‘Are you going to pick up Thorn?’ After a brief back and forth, I appoint myself to be the one making the uncomfortable walk in front of them, to the little table where the interview will take place. Almost stumbling, I move out of the leather seat.

On my way to the entrance, I keep repeating the most important questions in my head. I can feel beads of sweat gently forming. Suddenly this idea flashes through me: am I not going to offend them? This is the Thorn de Vries, not only a famous non-binary transgender activist, actor and performer, but also one of the few representatives we have as a transgender community. The rising star from de Anne+ movie knows how to represent in a way beyond public manageability: they set a story that is truly contrarian. As trans community, we need those positive role models in this humiliating world.

The continued lack of representation of transgender people in the media prompted me – as a binary trans woman – to start making media and opinion myself. For example, I have co-presented on radio shows and podcasts about social issues and have written articles for various platforms – often on trans-related topics, but also on other issues. However, my desire to see a reflection of myself in the media has not diminished. In fact, when I see someone like Thorn at the table of the big talk shows, a new desire forces itself on me. This desire is to speak out to fellow activists. To engage with them.

Thorn plops down on the design stool. It is obvious that this is not the first interview that they have given. Their relaxed features stand out sharply against my cramped fingers. ‘I just came back from my vacation,’ they start to talk. ‘The premier of Anne+ and the accompanying press tour made me feel like I had my life lived for one.’ Thorn talks about his first cinema hit: a queer film portraying the Amsterdam lhbtiq life. Thorn plays the role of Lou, a non-binary character. Abruptly I start asking questions.

Is visibility in the media by definition a positive thing?

‘Visibility of binary and non-binary trans people is important for the emancipation of trans people but it has to be a good representation, something that does justice to the lives of trans people. Too often the representation is one-dimensional, for example, for a very long time there was only attention to the classic transition story: woman becomes man, man becomes woman. In many movies and series, the storylines of transgender characters are still only about gender and all the problems that comes with being transgender. Traumaporno is what I call it. Once the character comes out of the closet then there is nothing left to talk about. Before my non-binary and layered character Lesley appeared in the series of Spangas, there was another trans character in this youth series. In creating that character, the writers fell into that trap of cliché at the time, but they learned from it. Some gains have since been made in paying attention to other narratives, such as those of non-binary individuals. While I think it’s good that non-binary characters are played by non-binary actors, I have now agreed with myself that I will no longer take on roles that are only about gender identity, the character may be non-binary or trans but it has to be about more.’

I sometimes feel that – in real life – we are only allowed to exist in one way. ‘Right: like the perfect, accommodating trans person: passing and not fussing about toilets or being misgendered. I am often told that I am so understanding, and that I explain everything so calmly. Then I think: okay, but if I were less calmly, and spoke out a little harder about injustices that trans people experience, would I also be invited to the table of a talk show? But I am who I am, and apparently I have something likeable about me that gives me a ‘space’ to tell my story. My masculinity helps as well, I have male privilege.

I notice that I sometimes envy trans masculine individuals. Most of those I follow have a fine relationship with, often, a cis person. Meanwhile, I am afraid of being murdered or beaten up when I go on a date. As a trans femme, I am not even allowed to state this message on feminist platforms. On feminist platforms, there is apparently still a fear: ‘if trans women speak up on stages like this, we’ll let men in’. However, trans masculine individuals may have an active presence there. I then feel the need to shout ‘Pull us along on stages you are given!’

‘I totally get what you’re saying and I do fell addressed… Sometimes it’s time to step back, be quiet, let another person have a say. But you should also use your privileges to actually make a point, show up and draw attention to your matter. That’s a complicated balance. I am wondering if I am even approachable enough to other transgender people. It’s necessary to talk to each other about our needs. I don’t have an all-seeing trans-eye. I don’t have the same experience as a trans woman and I can’t pretend I have.

Do you feel responsibility to the gender non-conforming community, since you are one of the few visible non binary persons?

‘In the beginning, I did feel a responsibility. Meanwhile, there are more and more decidedly non-binary people. The burden is shared more,’ they joke. ‘’Things’ are happening. There are podcasts being made, there are television appearances by and about non-binary individuals, and people like Raven van Dorst and Nanoah Struik are doing good work.’

Do you feel that as a trans person you have become shared property of the transgender community?

Thorn weighs in ‘Hm yes, I do have a bit of that feeling at times. I need to learn to guard my boundaries in this, know that I cannot speak for everyone. I am also aware that I fall within a certain stereotype of non-binary people: I have an androgynous appearance, I’m white, I’m AFAB [red. assigned female at birth]. Of course my gender identity and gender expression are valid, but it shouldn’t be the only thing people see. A trans femme of color does not recognize herself in me. There obviously needs to be much more representation of a diverse group of trans people.’

‘Representing everyone is a standard we impose on each other that is not achievable.’

‘True, but what we can be careful of when we are speaking publicly is that we are not only standing up for our own interests, but also for the trans community as a whole. For example, I don’t use testosterone, but I do want the process for trans people to get hormones to be easier so I speak up about that.’

How do you choose your stages?

‘If it’s not my story to tell, I don’t tell it. For example: Most transgender people of color who have been murdered are of color. Then I don’t think that I should be doing a speech on Transgender Remembrance Day. Sometimes I’m glad they ask me instead of a cis gender person. But I – and the media maker – must always ask ourselves critically: shouldn’t be someone else be approached for this conversation?’

The well-known transgender youtuber Natalie Wynn, known as Contrapoints, tweeted the other day that asking for pronouns does not provide security for her at all. She stated that in a clunky sports bar in conservative North Carolina she is constantly addressed with madame and she, while in woke places, she has to explain her pronouns every time. How do you feel about that?

‘I understand what you’re saying: as a binary trans person, you’ve been on a journey and you may not want to be reminded of something you’ve left behind by a question like this. I certainly don’t want to detract from that experience. But I do think a space becomes safer when you ask each other which pronouns are preferred. And if everyone is asked, you don’t have to feel personally attacked. On the contrary: it is meant to be respectful. Personally, I like it and feel respected when people ask about it.’

I shrug my shoulders: ‘I recognize it. The other day I was the only transgender person at a party of a club that profiled itself as progressive. When we were addressed with “Ladies and gentlemen,…” the speaker looked at me uncomfortably for a moment and then continued “and everything in between,…” – like I am not a real woman.

Thorn: ‘Safety of one, is the unsafety of the other, but I think when asking for pronouns is done by everyone, that does provide safety.”

Do you think the debate around gender has become more heated?

‘I think we live in a polarizing time. I educate in schools and sometimes I am shocked at the hateful thinking you hear back there. But I also come to schools and think: wow it’s already perfectly arranged here with understanding teachers and a safe atmosphere where all types of genders and sexualities can express themselves. That gives me hope. On the other hand, there are people with influence who make damaging statements in the media and can get away with it. I myself experience verbal abuse on a regular basis; I try to ignore it for the most part.’

What do you say to those little Thorns who read hateful anti-transgender posts?

‘I would tell them: “It’s not about you but about that petty writer. We are all oppressed by gender norms, and the people who speak out transphobically in the media can’t take the fact that we have broken away from them.” Young trans people I would encourage to find places where they can find each other and engage with each other. I myself also sought out those communities where I felt supported during my coming out as a non-binary trans person. There is much love within the transgender community. For me, the ballroom scene was and is an important community; I found a second family there with Amber Vineyard as my mother and mentor. I have found that as a trans community, we can also serve as an arm around each other.

To me, Thorn was a well-known transgender activist who seemed to know it all, but our conversation gave me an insight into his self-reflection. It opened my eyes: transgender visibility is an untrained path for anyone who personally dedicates themselves to it. As a community, the key is to build new paths together and in the meantime stay kind to one another. 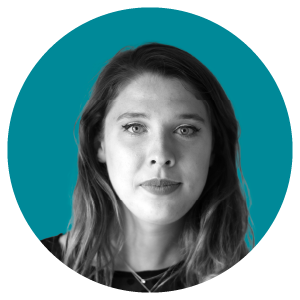 (she/her)
Tammie is studying Philosophy, Law and European Studies at the University of Amsterdam, and is ready to bring this knowledge into practice. For TRANS magazine she makes political and social analyses of trans identity and writes articles with a personal and activist touch.